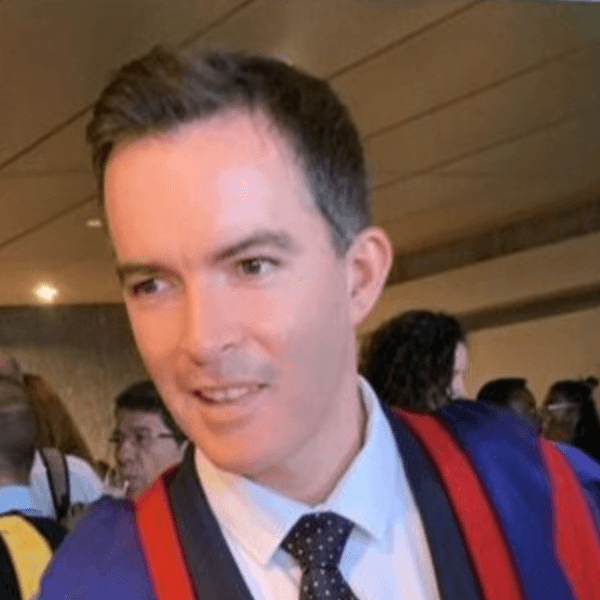 Head of Learning and Research at Wellington College UK

One of the difficulties with determining what is effective in a classroom is that very often, what looks like it should work does not and vice versa. Take, for example, the notion of engagement.

On the surface, this would seem like a necessary condition for learning. However, there is some evidence that it may not be a sufficient one. Graham Nuthall explores this dichotomy in his seminal book The Hidden Lives of Learners (Nuthall, 2007, p. 24):

“Our research shows that students can be busiest and most involved with material they already know. In most of the classrooms we have studied, each student already knows about 40–50% of what the teacher is teaching.”

Nuthall’s work highlights the fact that students are keen to busy themselves doing tasks that give the appearance of learning but which actually might just be disposable activities that do not engender long-lasting and durable learning. In addition, there is the fact that students’ prior knowledge about a particular domain is really the key element in terms of how their learning will progress. As Tricot and Sweller (2014, p. 9) point out, ‘when performing a cognitive task requiring domain specific knowledge, the presence or absence of this knowledge is the best predictor of performance’. Without knowing what students know or don’t know, teachers might not be putting students in a place where they are transforming their understanding of a particular concept, and what might look like learning might in fact just be keeping busy.

There is also the distinction made by Nicholas Soderstrom and Robert Bjork (2015) that learning and performance are not the same thing. Performance is short-term (e.g. the score on a test) while learning is long-term (e.g. what you remember and can use tomorrow, next week, next month…). The notion that one can enter a classroom and somehow see learning is a misguided one, and as Rob Coe (2013) points out, engagement is often a poor proxy for learning. Teachers can be labouring under the delusion where ‘“I have taught it” becomes a proxy for “they have learned it”, without a need for any independent check on what (if anything) has actually been learned’ (Coe, 2013, p. 12).

Here is where the science of learning is so important: it allows us to circumvent these cognitive biases and see the forest for the trees. As Soderstrom and Bjork remind us, ‘how we learn is often vastly misaligned with our metacognitive assessments of how we think we learn’ (Soderstrom and Bjork, 2015, p. 32).

So, what does an applied understanding of learning science look like in practice? What does it mean to differentiate between surface engagement and actual learning – to prioritise substance over performance? To answer such questions, we might consider the following example.

Imagine that you are an English teacher part-way through a unit on different authorial styles and you wish to deepen student understanding of that content. You scour the internet for available resources and narrow your search down to the two options seen in Figure 1. Which would you choose and why? 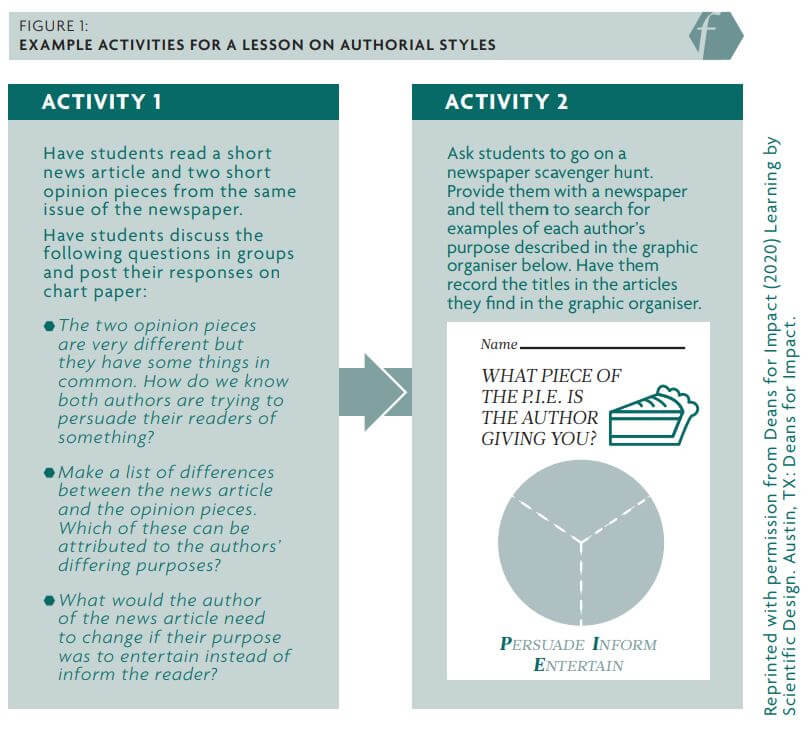 Even though there is a range of contextual factors to bear in mind when making a decision of this nature, there is nevertheless a correct answer in the eyes of learning science – and that is Activity 1.

A number of good reasons point to why, chief among them the depth of processing required to complete the first task rather than the more surface-level acts required for the second. In Activity 1, students are essentially provided with examples and non-examples of various authorial styles all at once. The opinion pieces are examples of persuasive writing but are not primarily informative in function. By contrast, the news article is an example of an informative piece that does not display the same features of persuasive writing. Each writing type can be defined as much by its difference to the other as by its own innate features.

By engaging in Activity 1, students can come to know what each style of writing is (and is not) by appreciating differences across the examples; they can move beyond the surface phenomena of the texts and examine underlying components by seeing how each functions differently than the other; and they can tie those features back to an emerging framework in which the categories ‘inform’ and ‘persuade’ populate a mental model that might figuratively be entitled ‘authorial styles’.

Having used comparison in the early part of the task to understand what informing and persuading look like in use, the final question invites students to transform a piece of writing through a series of modifications borrowed from another approach – to amend ‘inform’ such that it becomes closer to ‘entertain’.

This is where the rubber of stylistic understanding hits the authorial road: by inviting an act of transfer
The processes of applying learning to new situations More
that both demonstrates and deepens the to-be-remembered features of each writing style. At this point, a third writing type is invoked so that students avoid the temptation to ‘parrot’ the style of the examples already provided. Instead, they must now appreciate that writing styles are made of parts that can be not only deconstructed but also reconstructed – and that they as learners can acquire the tools for doing so.

Success in Activity 1, and an evolving understanding of the target content, is impossible without directing students’ attention in such a way as to invite understanding and comparison of the authorial features on display.

Success in Activity 2 requires only that students recognise the surface features of each authorial style to the extent that they can be categorised and sorted into their corresponding P-I-E buckets. Attention need not be paid to comparing features across the styles, be they surface or underlying, since at no point is a student prompted to justify why they placed an example of a given authorial style into a given category. This, combined with the lack of an opportunity to try out their emerging understanding through any act of transfer, means that there exists no distinct opportunity for students to show what they know and how they know it. The result is a task that directs attention to surface-level phenomena and which more likely fosters surface-level engagement as a result.

To put it another way, it is impossible for students to complete the first task without coming to some appreciation of the intended takeaways of the lesson, whereas students could engage in the second task without ever turning their attention to the concepts at hand – and certainly not with a depth of thought that would lead to meaningful or durable understanding.

The above example recently featured in a paper published by Deans for Impact (2020), examining the extent to which over 1,000 teaching candidates in the US understood and were able to apply learning science principles. The paper stated that only 22 per cent of surveyed future teachers picked Activity 1. One lesson to take from this appears to be that all teachers, for better or worse, operate according to a mental model guiding their practice. The instructional choices that teachers make every day are grounded in this mental model, which might figuratively be entitled ‘what good teaching looks like’ – all of which invites a question: for a given teacher, what does that mental model consist of and what is informing its development?

One clue might reside in the open-ended responses collected from those who selected the second option as the preferred task in the recent Deans for Impact (2020) survey:

Well-intentioned though the reasoning found in these responses may be, they contain no shortage of the kinds of edu-myths that pervade the teaching profession – a reality that might say as much about the models of teaching that those candidates had been exposed to and socialised to see as ‘engaging’ as anything else.

To put a finer point on why one of these tasks is better supported by learning science than the other, we can turn to Figure 2 and what Dan Willigham (2009, p. 7) has referred to as ‘just about the simplest model of the mind possible’. 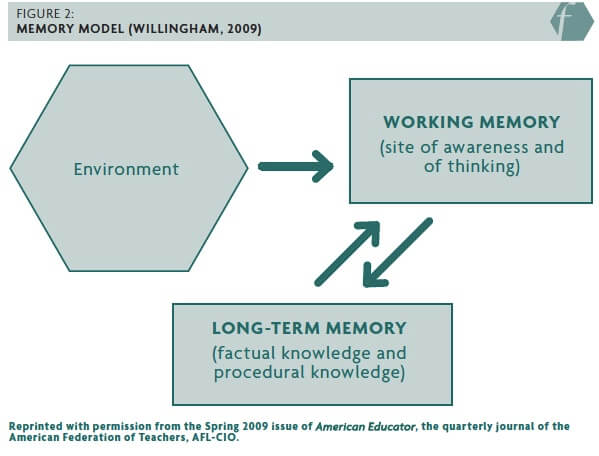 One way of interpreting this model is as follows:

Given the above articulation of ‘the simple model of the mind’, it would therefore be reasonable to assume that if attention is a finite resource – and we can only encode what we have first paid attention to and thought about deeply – then a core part of teaching is supporting students in thinking about to-be-remembered content and not other things. Therefore, teachers should design tasks that require students to focus their attention on the meaning of the content in question.

This is why Acitvity 1 is the right answer.

The contrast between knowing which is the better task and which is not becomes starker still when we consider how such choices might typically play out in practice. Teachers tempted by ‘Activity 2’ tendencies open themselves up to false-positive feedback loops in which students appear successful and present as engaged, all of which the teacher interprets as a sign of learning.

Students might feel inclined to approach the teacher at the end and thank them for a great class; the next parent–teacher conference might result in hearing those perennially sought-after words: ‘My son/daughter absolutely loves your lessons.’ And why wouldn’t they? Playing sorting games is fun and provides the illusion of progress.

All of this is made possible because of a dissembling force at work – a force that confuses ‘what looks like it should work’ with ‘what actually works’, and which conflates ‘I have taught it’ with ‘they have learned it’. The outward-facing indicators of ‘success’ in a task, or unit, or school year, or school career are taken as proof positive that durable learning is taking place under the surface. Compelling outward indicators of engagement only serve to affirm the belief.

Such misunderstandings of engagement and progress have the power to do lasting damage, since the results of the disconnect (students who didn’t learn what was hoped) are often discovered only when it is too late. Indeed, such gaps and missed opportunities may never be fully revealed, as the diminished attainment of the student is attributed to other factors, further shrouding the root cause of the problem.

Much has been written about what it would take to close the gap between theory and practice in education. Instead, we should perhaps take on a gap of a different sort: a gap grounded in cognition and perception, existing between the espoused intentions of a lesson, unit of learning or curriculum and that which plays out in its enactment. A gap that could begin to close once we as teachers apply the lessons of learning science and use them to illuminate the difference between the surface phenomena and underlying structures of our practice.