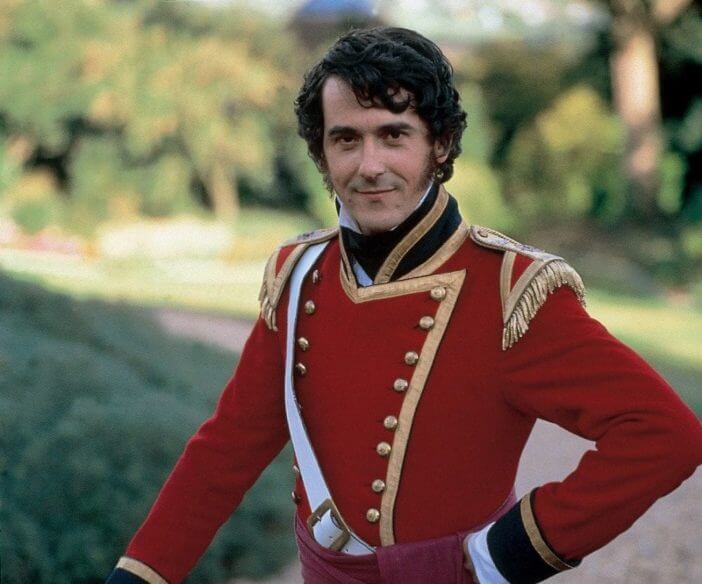 The first play I was in was The Mummers Play, in which I had the second lead (!), the Turkish Knight. This was at my prep school, aged nine, when my family returned from Australia. The lead, quite rightly, was St George! This was the moment I fell in love with all the thrill of performing and playing a character other than my own. All I could then think about was the next production…unfortunately a year away! And that was The Car, I’ve forgotten the name of the writer.

Acting in the theatre requires being truthful, as it does on film. The difference is the size and scale of performance. The camera picks up the slightest emotion, in the same way as if you were sitting opposite the person; you can see what is going on in their heart and mind. In other words, subtlety.

In theatre, where the actor may be playing to 1200 people, a delicate, subtle performance wouldn’t be seen from the back of ‘the Gods’, so it has to be exaggerated (without losing ‘truth’). Overacting is really another way of saying untruthful, bombastic, unbelievable.

Being an interesting performer is a much more complicated business! It is about more than being truthful, requiring an intensity and a deep understanding of the character. The actor must nail ‘who’ the person is that they are playing. If it’s a period piece, mumbling the lines would be probably inappropriate. An often-overlooked aspect of character work is that people are trying to appear to be something they are not. We all have an idea of how we WANT to be seen, and we do everything we can to cover up our frailties and needs. The actor needs to decide what is being concealed. I am always struck by watching documentaries of old soldiers. They don’t WANT to cry; they do their darnedest to NOT cry. A poor choice for the actor would be to sob continuously through a speech. Much more interesting to watch somebody fighting back the tears!

I have been lucky enough to play a wide range of characters on both TV and in theatre. Psychopaths, lovers, sweet country doctors, ineffectual buffoons, charming womanisers…but the villains are usually more interesting to get to grips with…

After the awful trauma of drama school (not entirely, but it can be a touch pretentious from time to time), the acting profession is actually pretty kind, tolerant and full of intelligent, committed people. It’s pretty meritocratic, although recently ‘proactive casting’ has become widespread. Politics has entered the arena, as with university admissions and civil service.

I have too many highlights to single anything out, although I did particularly love playing Walter in The Price, recently finished its run at London’s Wyndham theatre.

I have just filmed a 6-part Netflix comedy with Lisa Kudrow and playing a paedophile headmaster in A Christmas Carol (somewhat updated!).

For young actors…. plough on. Fame will come to very few, don’t expect to be a star, the overwhelming odds are that you won’t be. If you can make a living, you will be doing better than most. Work hard, especially on the technical side – practice your voice work, you must have a flexible, expressive voice. Stay fit, avoid the drugs and limit the booze. Read scripts, practice saying the lines, think how you would approach the role.

How has the last year with the pandemic affected you within the Arts industry?

It’s been ominously quiet for all of us, but the performing Arts have been particularly hard hit of course. But things will bounce back. They always do. We survived Cromwell after all!

There will always be the hunger for the live event.

Film and TV are already up and running. In fact, I understand that there aren’t enough skilled technicians to fill the jobs.

As for my own updated life. I have written a play (as you now know!) and have hugely enjoyed filming three projects this year. Series 2 of Feel Good with Lisa Kudrow and Mae Martin, SAS Rogue Heroes for BBC (play in General Auchinleck, who I believe was a pupil at Wellington!) and a modern political thriller, Anatomy of a Scandal.

My play Being Mr Wickham tours in October and there is talk of reviving The Price for a run in Sydney early next year.