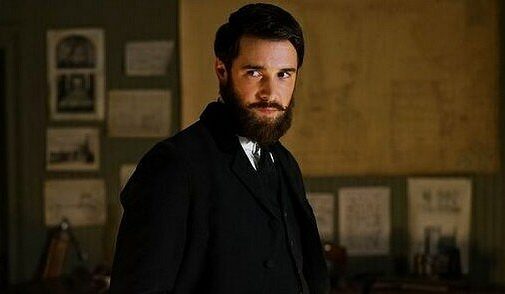 When I was contacted by Rosie Hill who was putting together this year book, I thought to
myself “what could I possibly say that could help others to forge a career in the arts?”. The
obvious question arises for most people who reflect on their life – “What do I wish I knew then,
that I know now?”. The question has funnily enough come up a couple of times for me recently
as I try to navigate the choppy waters of what people call “show business”. I sometimes go
back to my days at Wellington and even prior to that and think to myself why I didn’t start
acting earlier and if I started earlier surely I would be ahead of where I’m at now. For me I think
of this last point for a bit and usually, after a moment of reflection say to myself – “maybe”.
The truth is we know so little about life, we don’t really know what path to take and whether
that path is the right one for us. Sometimes, in my case, you put everything into one career
choice and life will change it for you.

I can talk a little about my career and how I got started as an actor but I don’t know how much
that will actually help you. For those of you who will go on to pursue the arts you’ll soon find
out that there is no blueprint for success. No “how to” guide book that you read and suddenly
start working. You’ll also find out that an artists hours aren’t 9-5 – it’s a blue collar gig where you
make your own hours and sacrifice plenty. I think what could perhaps be more worthwhile to
you at this stage is relating to some of your potential anxieties about which path to follow and
hopefully imparting a little wisdom from what I’ve personally learned along the way.
I was so fortunate to find acting or, should I say, acting found me after I left Wellington. During
my time at school I threw myself into all of the arts I could – acting, jazz band, even a
drumming group with the magnificent Mr Smith!

But I also had another passion…Rugby, and at the time my main goal was to become a
professional rugby player. After surgery for a dislocated shoulder at the start of Upper Sixth, I
stubbornly reached my goal, signing an academy contract for Saracens the summer I left
school. But 6 months into that I was back in hospital and having another surgery for the same
injury.

My dream was over. I was no longer a rugby player and was left scrambling for what I wanted
to do with my life. Pretty frustrating for a guy who trained all summer, every summer since he
was 15 to reach this goal!…But little did I know that this perseverance and tenacity is what has
made me a “working actor” to this very day. Because believe me when I say that the number
one asset to have as an actor or artist of any kind is perseverance. An important asset to have
when the percentage of out of work actors today is above 90%…

When my uncle put me in touch with a film and tv agent he knew, she luckily took me on and I
started auditioning for roles right away and somehow booked a couple of commercials. I had
absolutely no idea what I was doing in front of a camera and I felt like a complete fraud, so
decided that if this was going to be the path I would follow with my career then I would take it
seriously, enroll in acting school and really find out if this is what I wanted to do.

Some of you who will go on to act after Wellington may well apply for drama school in England.
I personally made a choice to not go to a British drama school. I felt an impulse to get out of
England and explore another country and city entirely. So I went to “The Lee Strasberg Theatre
& Film Institute” in New York city. After studying there for a year I knew 100% that acting was it
for me. And not only was acting a big draw for me but being in America was extremely
liberating. It really felt like the land of opportunity. I knew I could make something of myself
there.

It was not long before my time at drama school was up when a photographer I had taken
photos with sent my headshot to a big agency in NYC (unbeknown to me!).
My phone rang – the agency wanted to meet with me. They set up some auditions with casting
directors with me playing American and British characters and from these readings I was told
to work on my American accent if I was going to have a real shot at a career in the US.
And so I did. Every day. At every opportunity I had to use it. Ordering a take away (the days
before you could do it on an app!) at supermarkets and even places where I felt embarrassed
to do it, I didn’t care because I knew it could be my ticket into the business. I didn’t know it at
the time, but I was right…

The next January, after a few months in England auditioning and working a little with bit parts in
Holby City and a couple very bad horror films(!) the NYC agency transferred me to their agency
in Los Angeles to try my hand at pilot season. Pilot season is between January and March
every year in LA and it’s where all of the new tv shows are cast. The pressure was and still is
quite high. You usually go through several rounds of auditions and every new round they seem
to pile more people into the room to watch you. Perhaps having been in competitive high
pressure situations at Wellington like the Rosslyn park 7’s or the Daily Mail Cup I could manage
it somewhat, who knows?

The old saying “luck is what happens when preparation meets opportunity” is absolutely true.
Somehow, I got a part in a tv show that enabled me to get a visa in order to remain and work in
the US. I was extremely well prepared, had no plan B, an opportunity presented itself and I
took it…luck. This pattern will go on to repeat itself many times in your chosen careers, I
promise you that.

So I stayed in Los Angeles and kept auditioning and working on my craft and the following year
I got a big part on a TV show called “Revenge”. This would be a life altering moment for me as
it allowed me to work on a huge production for 4 years of my life. It’s what I look back on now
and call my “university degree” in film and television – except I was paid to go! I had won the
lottery. I’m not saying that this is the way to do it – going to America and rolling the dice with no
other plan whatsoever. It was my way.

During that time I fortunately got to work with and be amongst extremely talented filmmakers
and award winning artists. Not one day did I take it for granted and as I have continued to work
in the business, through the ups and downs, wins and losses – I have always relished every
chance I have to collaborate with my peers. This is something that was encouraged and
nurtured in Wellington – teamwork and collaboration. Be it in a sport like rugby, part of an
ensemble in a jazz band or a cast of a play, teamwork is absolutely essential. When you and
your partner are so in sync with each other you become almost untouchable, unbeatable –
you’ll never feel more human and alive. When you experience that (and it’s not often) you can
see why we do this for a living.

Because at the end of the day, all of this is about a connection and the humans we meet along
the way.

Lastly, as some of you are leaving the safety net of school, I implore you to get out of your
comfort zones. Try new things, experiment, travel, explore different cultures and get some
perspective – all these things are paramount for an artist. Find what makes you tick, that’s the
most important thing above all – find your passion.

You are so lucky to have been educated at Wellington College, people could only dream of
going to a school like that. Believe me, I’ve seen and spent time with many different types of
people all over the world and you are beyond privileged. Never take that for granted. Ever.
Work harder because of it – because there are many people out there who are extremely
talented and hard working. Talent is not enough.

In fact, you’ll find most actors don’t quit the business: the business quits them. The most
common complaint about the acting game is that the profession is unfair. It isn’t: but it is
indifferent. It gives everything to some, and nothing to others, and it won’t explain why. There’s
no point complaining – nobody’s listening.

So, to answer my own question – “What do I wish I knew then, that I know now?”.
How about I leave you with 10 answers to that question…

1 – Be authentic
2 – Never base your personal happiness on your career or success
3 – Never be too proud to ask for help
4 – Instinct never shouts – it whispers
5 – Break the rules – no one ever “made it” by conforming
6 – Be patient
7 – Be nice to people on the way up – cause you never know who you’ll meet on the way down
8 – Take accountability
9 – Always ask questions even if it may appear a simple answer. I believe there’s no such thing
as a stupid question
10 – Above all – Never, ever be afraid to fail.