Wellington College’s first Speech Days were modelled on those held at older schools such as Rugby, where our first Master, Edward White Benson, had been a teacher. These had grown out of annual visitations in which the Governors would examine the students to see whether they ‘do profit by their learning or not’. To demonstrate their scholarliness, students recited Latin and Greek poetry and prose which they had written. These were the original ‘Speeches’. 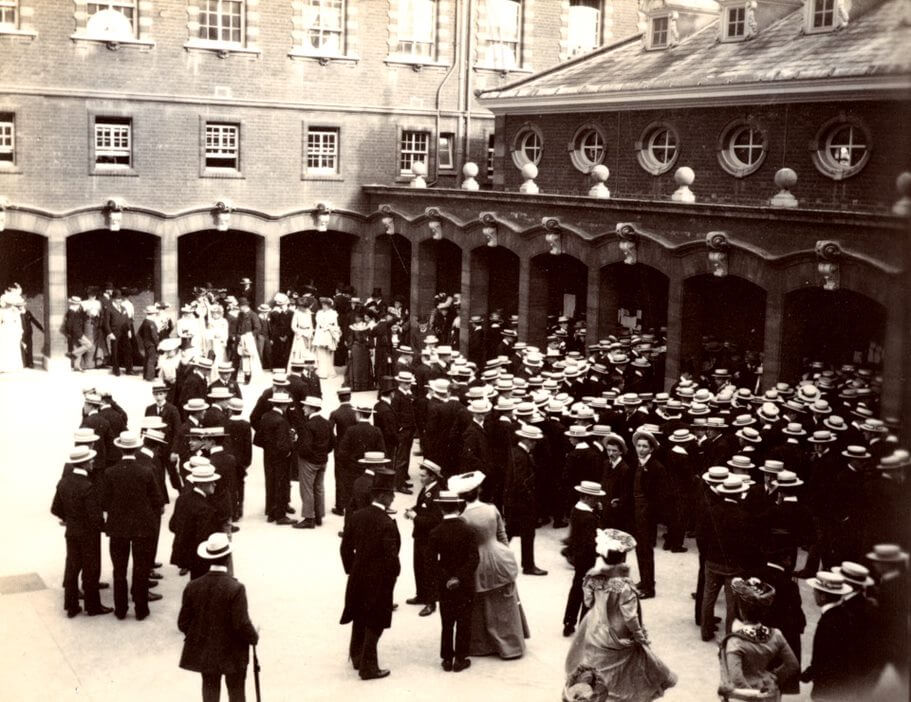 As a school with a more modern curriculum, Wellington’s Speech Days also included prizes for various subjects including sciences, languages and drawing, as well as the top prize, the Queen’s Medal, for general character. More prizes have been endowed over the years, so that over 250 are awarded annually now. 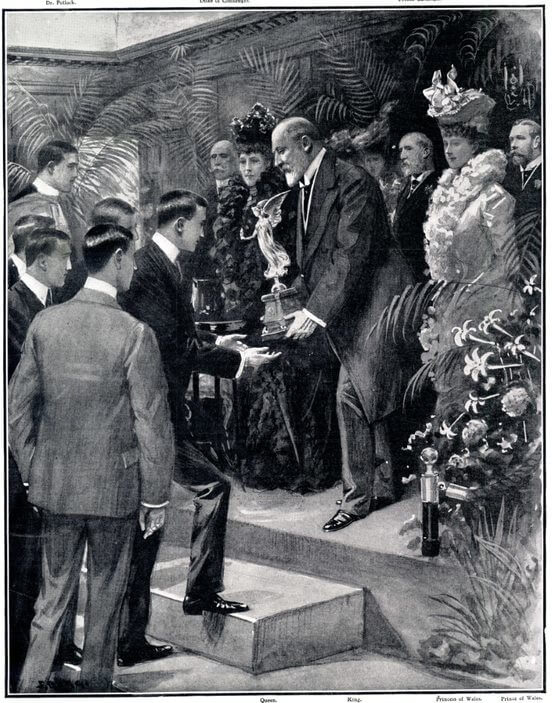 The date for Speech Day rapidly became established as 18th June, the anniversary of the Battle of Waterloo, or after the First World War, the nearest Saturday to that date. Since the 1950s it has moved gradually earlier, eventually to the May date used now.

In the early years it was not usual for parents to attend Speech Day, but royal patronage and the College’s distinguished Board of Governors meant that VIP guests were often present. In 1861 Albert, the Prince Consort, laid the Chapel foundation stone on Speech Day. Three years later the Prince of Wales, later Edward VII, made the first of numerous Speech Day visits.

In 1872 the first Speech Day Concert took place after lunch; this later moved to the Eve of Speech Day. The first students’ Art Exhibition was held in 1881, while in 1889 the newly opened Gymnasium (now the Old Gym) housed a Physical Training display for the first time.

Under Bertram Pollock, Master of Wellington from 1893 to 1910, Speech Day became a glittering event, reaching a size and splendour not seen again until the present century. Parents and honoured guests would be served lunch in the main school buildings before prize-giving took place in the Gymnasium (now Old Gym). This was followed by tea in the form of a garden party for up to 2000 guests on Turf, while the VIP visitors were served tea in the Master’s garden.

King Edward VII, a frequent visitor while Prince of Wales, attended the day as King on three occasions, in 1904, 1907 and 1909. He remains the only reigning monarch to have visited on Speech Day. The events of 1909, marking the College’s 50th anniversary, were the most brilliant of all. The Master’s notes show that he considered every detail, including obtaining the recipe for the King’s favourite drink, and hiring in equipment and waiting staff from Harrods.

Speech Day was cancelled four times between 1900 and 1910, due to the deaths of two monarchs (Queen Victoria and Edward VII) and two College Vice-Presidents. A simpler, low-key event was held during the two World Wars, and in 2020 and 2021 Speech Day went ‘virtual’ due to the Covid pandemic. Apart from these exceptions, Speech Day has been held continuously since 1859.

The twentieth century saw gradual changes; for example, the venue for the prize-giving ceremony has varied as College numbers grew and our buildings expanded. The current Big Top was introduced in 2013. Our royal Presidents have often been honoured guests: Victoria and Albert’s son, the Duke of Connaught, carried out this role for forty years and the Duke of Kent has now been our President for more than fifty.

In earlier times women did not play an active role, but thankfully this has now changed. In 1967 the Duchess of Gloucester may have been the first woman to present the prizes, while in 1997, chef Prue Leith was the first to give a speech.

For many years Old Wellingtonians have been a key part of the day, with a College v OW cricket match and telegrams from OWs around the world. During the 1940s and 1950s, the OW swimming match was followed by a ‘General Bathe’ during which anyone who wished could pile into the outdoor pool.

The entertainment on offer has grown year on year. Exhibitions of students’ artistic, musical and physical talents have been supplemented with displays showcasing societies, expeditions, and service. In the days before Speech Day was followed by a holiday, there were evening entertainments such as film shows or fireworks. 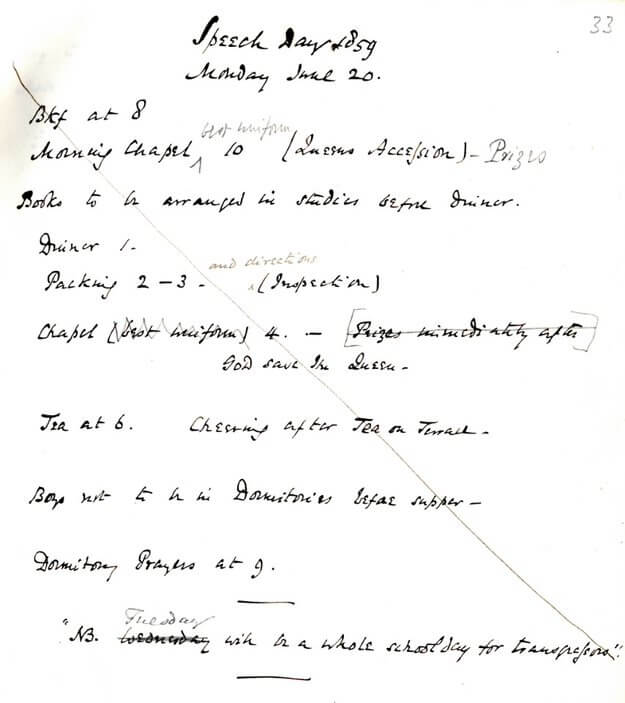 In spite of changes, some elements have remained constant. The prize-giving ceremony has always formed the central part of the day, and some prizes including the Queen’s Medal, Lord Derby’s Gift and Prince Consort’s History Prize have been awarded ever since the 1860s. The Master’s Speech is another indispensable feature. Callover, at first the regular ‘register’ of students taken daily, has become gradually more ceremonial and now forms a unique and special end to the day.

Back to all news